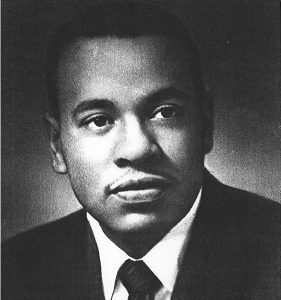 Slater King was the owner of a successful real estate and insurance brokerage firm in southwest Georgia whose involvement in the Albany Movement led him to look for ways that African Americans might secure not only their legal and political rights but economic independence as well.  Launched in 1961, the Albany Movement was the first mass movement in the modern civil rights era to have as its goal the complete desegregation of an entire city.  Initially elected vice president of the Albany Movement, King assumed the presidency a year later.  He was jailed a number of times for civil rights actions, on two occasions sharing a cell with Martin Luther King and Ralph Abernathy, who had come to Albany in support of the protests.

Several years later, as the Albany Movement receded, he began working with Bob Swann, Charles Sherrod, Fay Bennett, Father Albert McKnight and others to lay the foundation for the first community land trust.  Slater King and his wife, Marion, were part of the American delegation that traveled to Israel in 1968 to study moshavim and kibbutzim, cooperative agricultural settlements on leased land.  During the year that followed, he helped to lead the planning committee that created the blueprint for New Communities, Inc.  When this new organization was formally incorporated in March 1969, he was elected president of the founding board.  The next month, soon after locating the large tract of rural land that New Communities would eventually buy, he was killed in an automobile accident.

Bob Swann, “New Communities—5000 Acres and One Million Dollars,” Chapter 20 in Peace, Civil Rights, and the Search for Community: An Autobiography (Great Barrington, MA: Schumacher Society for a New Economics, 2001).