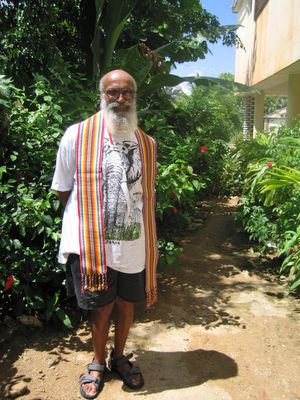 Albert J. McKnight was born August 18, 1927 in Brooklyn, New York. He was ordained as a Roman Catholic priest on June 6, 1952. He became a life-long member of the Congregation of the Holy Spirit, a religious order whose members are known as either Holy Ghost Fathers or Spiritans. During his long career, he periodically served as a parish priest, including a six-year stint from 1982 to 1988 at the Holy Ghost Catholic Church in Opelousas, Louisiana, one of the largest African-American parishes in the United States.

“He was passionate about serving the black community,” reads his obituary, “and served on many national financial, philanthropic, and human rights committees, including being the Executive Director of the National Black Catholic Clergy Caucus.”

In 1968, he traveled to Atlanta to participate in a meeting called by Slater King, Fay Bennett, Charles Sherrod, Bob Swann, and four other activists who had recently returned from studying moshavim, kibbutzim, and land tenure in Israel. Father McKnight was quickly persuaded of the worth of their proposal for establishing a regional network of cooperatively managed leased-land agricultural communities. He joined the planning committee for the organization that was incorporated in 1969 as New Communities, Inc. He then joined the governing board of this CLT prototype, serving as the organization’s first vice president.

In 1979 President Jimmy Carter appointed Father McKnight to the board of the newly established National Cooperative Bank. He became the Bank’s vice chairman. In recognition of his many contributions to cooperatives, he was inducted into the Cooperative Hall of Fame in 1987.

In the 1990s, Father McKnight was approached by Father Joseph Philippe, founder of the Peasant Association of Fondwa in Haiti. He sought McKight’s assistance and advice in furthering sustainable development in the island’s rural areas. Father McKnight eventually moved to Haiti. In 2004, he worked with many others in helping to start a new institution, Fondwa University. He personally taught courses on cooperatives and served as the University’s chaplain. He officially retired in September 2005, but continued to live at Fondwa and to counsel both the students and faculty as Fondwa’s chaplain.

Father McKnight died on April 17, 2016. He was buried in Louisiana, near the church in Opelousas he had faithfully pastored forty years before.