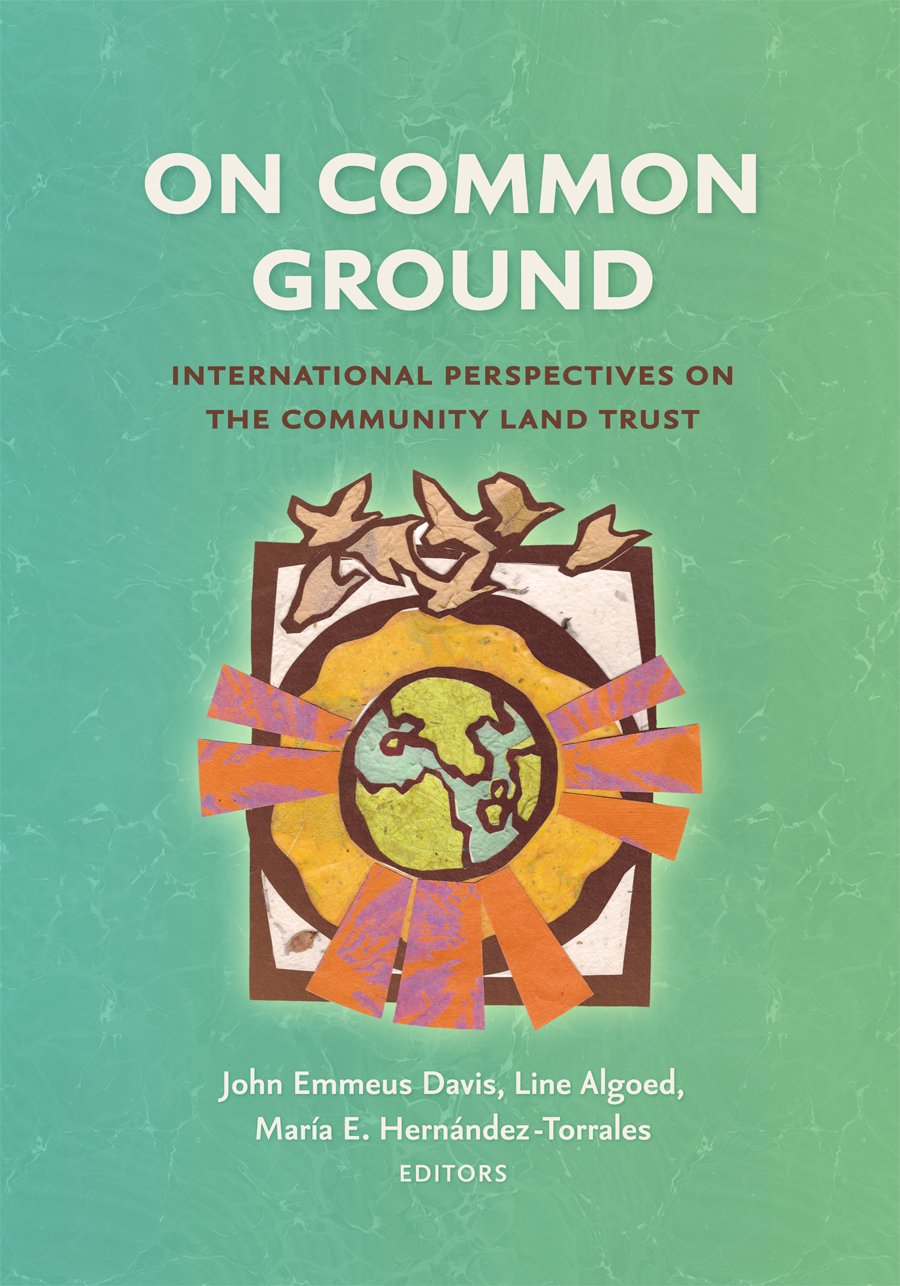 On Common Ground: International Perspectives on the Community Land Trust is a collection of twenty-six original essays, written by forty-two scholars and practitioners from a dozen countries, tracing the growth and diversification of the international community land trust movement.

Bulk order discounts available for NGOs.  For more information, and to place your order, go to our Bulk Orders page.

“ The visionary leaders, communities and organizations featured in this book are at the forefront of a broader national and global movement to recalibrate the relationship between governments and markets in housing and development policy.”

We are providing free audio versions of selected chapters from On Common Ground, narrated by the authors themselves.  You can stream them here online, or listen to them on Apple Podcasts and Spotify.

Fifty years ago, African-American activists in Albany, Georgia extended their political fight for civil rights into the economic realm by creating New Communities Inc. They had come to believe that owning land was essential to securing greater independence for their people. But landownership was out-of-reach for most African-Americans in the Deep South of the 1960s and too easily lost if they did acquire a small farm, a plot of land, or a house in town. The visionary founders of New Communities concluded, therefore, that community ownership would be a more secure form of tenure. Community-owned land could be combined, moreover, with the individual ownership of newly built houses, offering low-income people an opportunity to become homeowners. Community-owned land could also provide a platform for the cooperative organization of various enterprises, offering low-income people a chance for economic prosperity.

This ingenious hybrid, blending multiple owners and uses under the watchful eye of a community-controlled, nonprofit organization, was the prototype for what eventually became, after some fine-tuning in subsequent years, the “community land trust” (CLT).

There are now over 260 CLTs in the United States and over 300 in England and Wales. Others have been established in Australia, Belgium, Canada, and France. Interest has also been rising in Germany, Ireland, Italy, the Netherlands, Portugal, Scotland, and Spain. More recently, the seeds for new CLTs have been scattering across the Global South as well, inspired by a high-profile CLT in Puerto Rico that is securing the homes of hundreds of families residing in informal settlements in San Juan. This has attracted the attention of communities struggling with land and housing insecurity throughout Latin America and the Caribbean, ranging from the urban residents of Brazil’s favelas to indigenous peoples in rural regions where their customary, collective use of homesteads, forests, and watersheds is often unprotected by formal title. Activists in Africa and South Asia have also taken note, weighing whether a CLT might promote equitable and sustainable development in their own communities.

On Common Ground: International Perspectives on the Community Land Trust explores the growth of this worldwide CLT movement. The book’s twenty-six original essays, contributed by forty-two authors from a dozen different countries, cover five general topics: BRIGHT IDEAS survey the conceptual and practical justifications for community-led development on community-owned land; NATIONAL NETWORKS examine the proliferation and cross-pollination of CLTs in the Global North; REGIONAL SEEDBEDS explore the potential for CLT development in the Global South; URBAN APPLICATIONS showcase the success of selected CLTs in London, Brussels, Boston, Burlington, and Denver, a handful of highly productive CLTs that are providing affordable housing, spurring neighborhood revitalization, and securing land for urban agriculture; CRITICAL PERSPECTIVES reflect on the changing environment to which CLTs must adapt if they are to “go to scale,” while remaining accountable to the communities they serve.

Line Algoed is a PhD researcher at Cosmopolis, Center for Urban Research at the Vrije Universiteit in Brussels and a Research Fellow at the International Institute of Social Studies in The Hague. She works with the Caño Martín Peña CLT in Puerto Rico on international exchanges among communities involved in land struggles. She is also an Associate at the Center for CLT Innovation. Previously, Line was a World Habitat Awards Program Manager at BSHF (now World Habitat). She holds an MA in Cultural Anthropology from the University of Leiden and an MA in Sociology from the London School of Economics.

John Emmeus Davis is a founding partner of Burlington Associates in Community Development, a national consulting cooperative in the USA. He holds an MS and PhD from Cornell University and has taught housing policy and neighborhood planning at New Hampshire College, the University of Vermont, and the Massachusetts Institute of Technology. He served for ten years as the city's housing director in Burlington, Vermont under Mayors Bernie Sanders and Peter Clavelle. Community land trusts (CLTs) have been a prominent part of his professional practice and scholarly writing for 40 years. In addition to publishing a number of books and articles about CLTs, he was a co-producer for the documentary film, Arc of Justice. He is a co-director of the Center for CLT Innovation. (See also: https://en.wikipedia.org/wiki/John_Emmeus_Davis)

María E. Hernández-Torrales holds an LLM in environmental law from the Vermont Law School and an MA in Business Education from New York University. She studied for her undergraduate and Juris Doctor degrees at the University of Puerto Rico. Since 2005 she has been doing pro bono legal work for the Proyecto ENLACE and for the Fideicomiso de la Tierra del Caño Martín Peña. Since 2008, Hernández-Torrales has worked as an attorney and clinical professor at the University of Puerto Rico School of Law where she teaches the Community Economic Development Clinic.

I. BRIGHT IDEAS. Surveying the diverse landscape of structures, strategies, and justifications for the community land trust.

II. NATIONAL NETWORKS. Examining the proliferation and cross-pollination of CLTs in the Global North.

III. REGIONAL SEEDBEDS. Exploring the potential for CLT development in the Global South.

IV. URBAN APPLICATIONS. Showcasing the projects and performance of CLTs in selected cities.

V. CRITICAL PERSPECTIVES. Reflecting on the changing environment to which CLTs must adapt if they are to “go to scale,” while remaining accountable to their communities.

Part One. Bright Ideas: Surveying the Diverse Landscape of Common Ground: Structures, Strategies, and Justifications
1. In Land We Trust: Key Features and Common Variations of Community Land Trusts in the US 2. The Once and Future Garden City 3. Common Ground: Community-Owned Land as a Platform for Equitable and Sustainable Development 4. Making a Case for CLTs in All Markets, Even Cold Ones 5. Challenges for the New Kid on the Block—Collective Property

Part Three. Regional Seedbeds: Exploring the Potential for CLT Growth in the Global South
10. Collective Land Tenure in Latin America and the Caribbean, Past and Present 11. Seeding the CLT in Latin America and the Caribbean: Origins, Achievements, and the Proof-of-Concept Example of the Caño Martín Peña Community Land Trust 12. Community Land Trusts in Informal Settlements: Adapting Features of Puerto Rico’s Caño Martín Peña CLT to Address Land Insecurity in the Favelas of Rio de Janeiro, Brazil 13. A Watershed Land Trust in Honduras: Profile of Foundation Eco Verde Sostenible 14. Seeding the CLT in Africa: Lessons from the Early Efforts to Establish Community Land Trusts in Kenya 15. The Origins and Evolution of the CLT Model in South Asia

Part Four. Urban Applications: Measuring the Progress of High-Performing CLTs in Selected Cities
16. Take a Stand, Own the Land: Dudley Neighbors Inc., a Community Land Trust in Boston, Massachusetts 17. Lands in Trust for Urban Farming: Toward a Scalable Model 18. The Best Things in Life Are Perpetually Affordable: Profile of the Champlain Housing Trust, Burlington, Vermont 19. Stewardship of Urban Real Estate for Long-Term Community Benefit: Profile of the Urban Land Conservancy in Denver, Colorado 20. London Community Land Trust: A Story of People, Power, and Perseverance 21. From Pressure Group to Government Partner: The Story of the Brussels Community Land Trust

Part Five. Critical perspectives: Meeting the Challenges of a Changing Environment
22. The Burden of Patience in a Long March Toward Racial Justice 23. A Reflection on the Bioethics of Community Land Trusts 24. Community Control of Land: Thinking Beyond the Generic Community Land Trust 25. Preserving Urban Generativity: The Role of Porous Spaces in CLT Projects 26. Better Together: The Challenging, Transformative Complexity of Community, Land, and Trust