Skip to content
Home » What Is a Community Land Trust?

A community land trust (CLT) is a nonprofit corporation that holds land on behalf of a place-based community, while serving as the long-term steward for affordable housing, community gardens, civic buildings, commercial spaces and other community assets on behalf of a community.

Community land trusts (CLTs) have been around for less than 50 years, although their roots are much older. Precursors to the modern-day CLT can be found in the Garden Cities of England, the Gramdan Movement of India, and the moshav communities of Israel, as well as in many of the single tax colonies and planned, leased-land communities created in the Unites States in the first half of the Twentieth Century.

The nonprofit organization generally credited with being the “ﬁrst CLT,” New Communities, Inc., was founded in southwest Georgia in 1969, a product of the Southern Civil Rights Movement. A decade later, only a handful of CLTs were operational in the United States, all of them in rural areas. The first urban CLT did not appear until 1980. Another 20 years passed before the number, variety, and dispersion of CLTs had reached the point where it was fair to speak of a CLT “movement.” Today, there are over 260 CLTs in 46 states, the District of Columbia, and Puerto Rico. The model has begun spreading to other countries as well, including Australia, Belgium, Canada, England, and France.

The community land trust combines a new approach to the OWNERSHIP of land, housing, and other buildings with a new approach to the ORGANIZATION of the nonprofit that controls this property. The basic features of the CLT model were outlined in The Community Land Trust: a Guide to a New Model for Land Tenure in America, published by the International Independence Institute in 1972. Ten years later, the Institute for Community Economics (ICE), successor to the International Independence Institute, refined and extended the CLT model in another publication, the Community Land Trust Handbook in which a new emphasis was placed on OPERATIONAL elements that distinguished the CLT from most other community development organizations and programs of the 1980s.

Three clusters of characteristics, defining the community land trust in terms of ownership, organization, and operation, came to be known as the “classic” CLT:

Title to multiple parcels of land, scattered across a targeted geographic area, is held by a single nonprofit corporation. These lands are never resold, but are removed permanently from the market and managed on behalf of a place-based community.

Any buildings on this community-owned land are sold off to homeowners, cooperatives, nonprofits, or other corporations or individuals. These structures may already exist when the nonprofit acquires the land, or they may be constructed years later.

A ground lease knits together – and equitably balances – the interests of the nonprofit landowner and the interests of the buildings’ owners. This ground lease lasts for a very long time, typically 99 years; it is also inheritable and mortgagable, allowing the owners of residential or commercial buildings to obtain private financing to construct or to improve their structures.

The nonprofit landowner – i.e., the community land trust (CLT) – has a corporate membership that is open to anyone living within the organization’s service area, which may be as small as a single neighborhood or as large as an entire city, county, or region.

A majority of the nonprofit’s governing board is elected by this membership.

There is a “preferential option for the poor.” Disadvantaged people who have been excluded from the economic and political mainstream and disadvantaged places that have been buffeted by successive waves of disinvestment and gentrification have the first claim on a CLT’s resources.

There is an organizational commitment to preserving the permanent affordability of housing (and other structures) that are located on the CLT’s land or placed under the CLT’s care.

There is an organizational commitment to maintaining these structures in good repair and in safeguarding the success of low-income people who have been boosted into homeownership or into other types or tenures of housing through the CLT’s efforts.

Not every feature of the “classic” CLT has been uniformly adopted by every organization calling itself a “community land trust.” The national and international landscape of CLTs is quite diverse, with numerous variations in the way these nonprofit landowners are structured and operated.

There is also wide variation in the kinds of land uses and in the kinds of buildings to which CLTs have been applied. Despite a strategic decision by leaders of the fledgling CLT movement in the early 1980s to focus on single-family homeownership, the model can be used – and frequently has been used – in the development and stewardship of other types and tenures of housing, including: multi-unit rentals, limited equity condominiums and cooperatives, and “mobile homes” in resident-controlled parks. CLTs have also been applied to many non-residential projects, including neighborhood parks, community gardens, commercial buildings, community service centers, urban agriculture, and family farms. 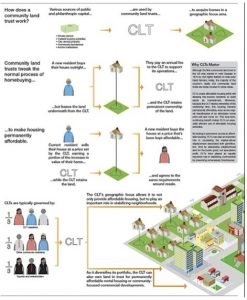 ANIMATIONS:  For animated introductions to CLTs in a variety of languages, go to our video library and click on the "animation" keyword.

BIBLIOGRAPHY: A selected bibliography of books, articles, and reports about community land trusts, compiled by John Emmeus Davis. This bibliography will be updated twice a year as new materials are published.

INFOGRAPHICS:  Here are some great infographics that describe how CLTs operate:

KEY FEATURES AND COMMON VARIATIONS OF CLTS IN THE US:  This chapter from On Common Ground provides an excellent overview of CLTs in the US.

LINKS: Additional materials describing features, applications, and variations of the community land trust can be found in the resource libraries maintained by: